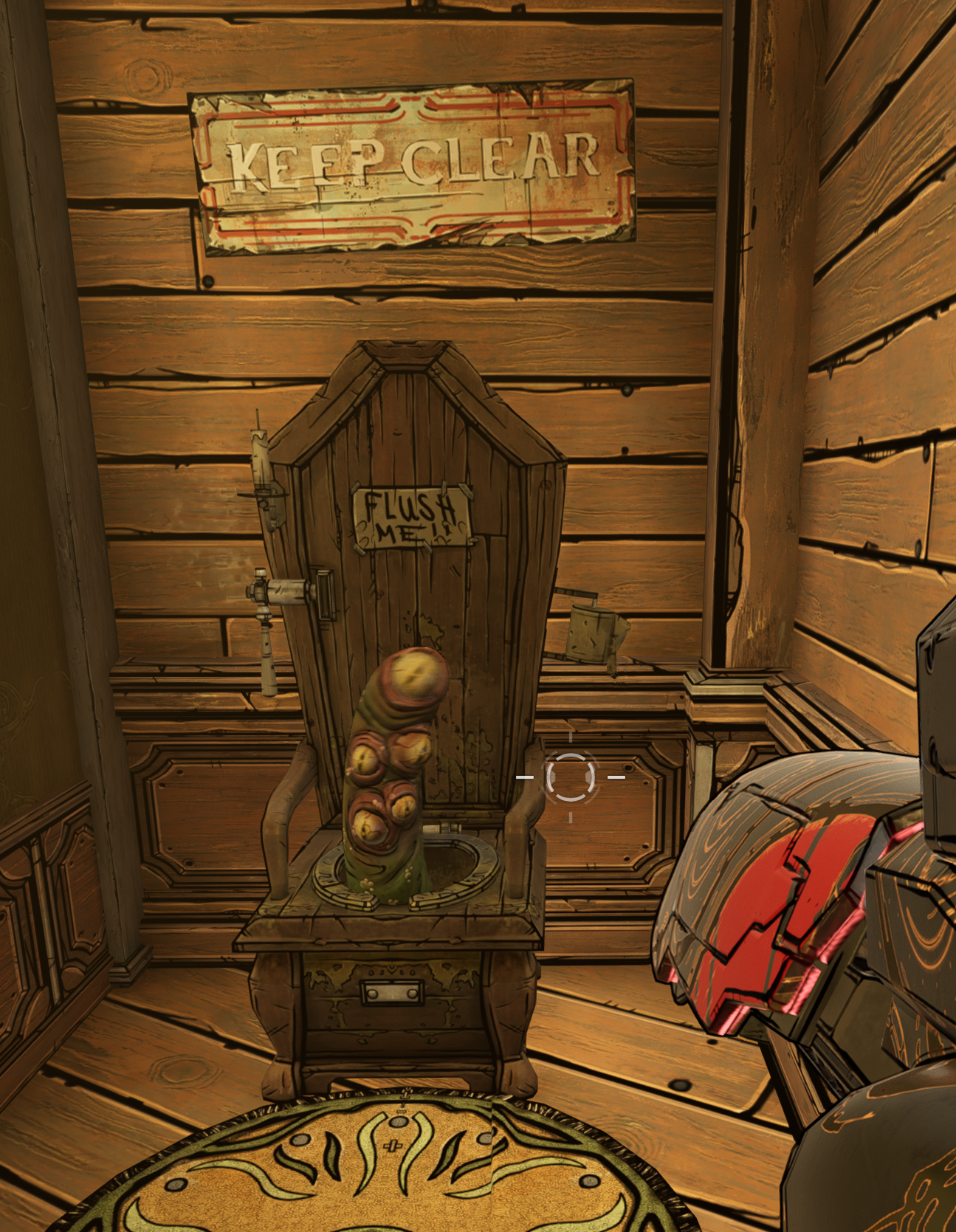 Submitted by bucket brigadier ILikeSocks! There is so much shit going on in this picture, it doesn’t even need a rollover. Our brigadier says this about his experience:

“This is from the Borderlands 3 DLC, Love Guns & Tentacles. It’s about a gay Lovecraft wedding. This one is in the safe area. They all say “keep clear” and “blast zone”, etc. When you interact with the flusher, this tentacle pops up and throws ammo and stuff at you.

There’s some grubby toilet paper the color of pine ash. When asked if the shitter has a sink, ILikeSocks stated, “Yes; it’s a haunted mirror, with a spooky face.” This is more of an ornament or museum piece, than a shitter one would actually use. The ‘tentacle’ is great. And by great I mean really gross, sorry. If we’re being real, we can admit what we are looking at here, and I’m going to say no thanks. 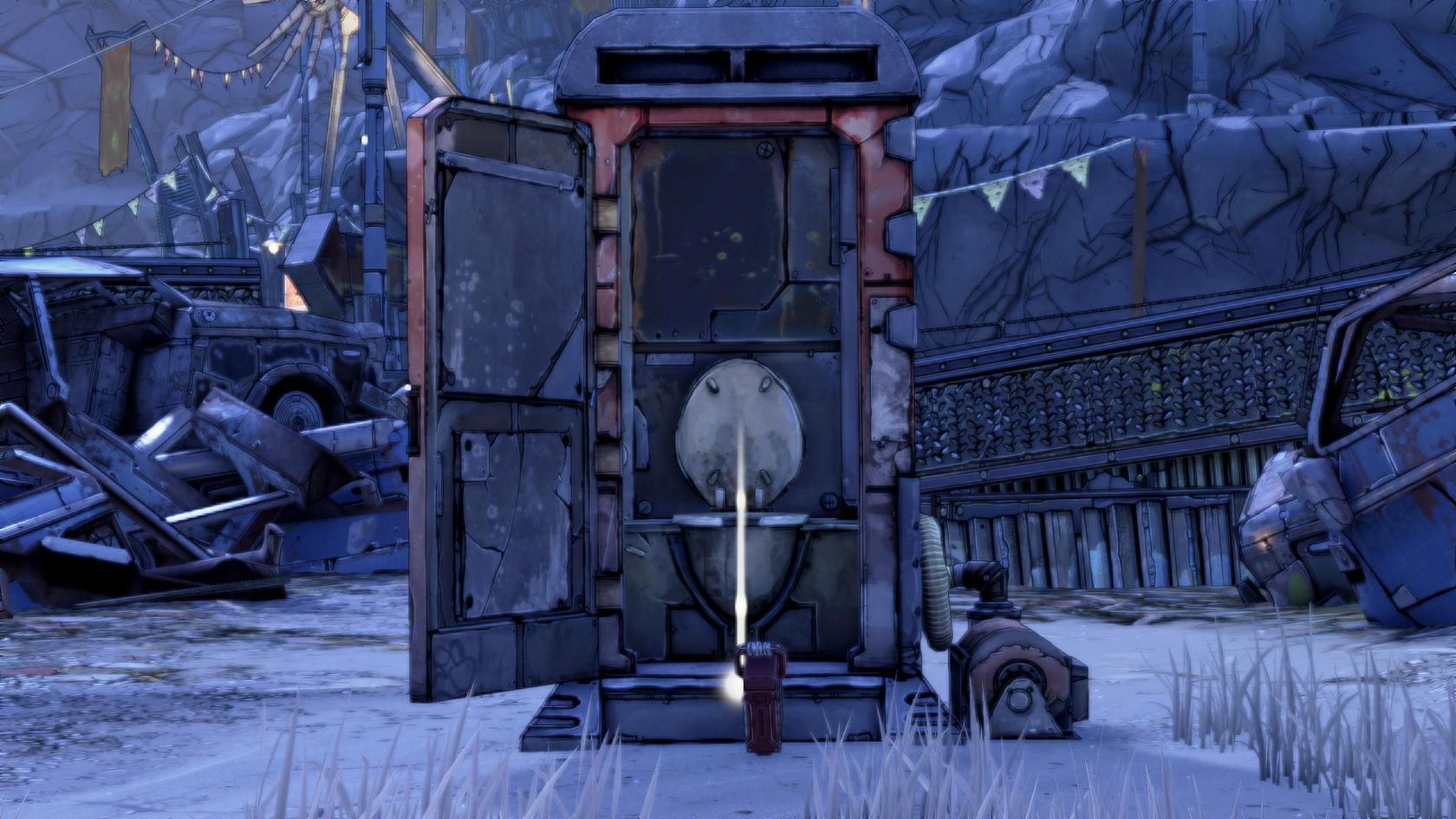 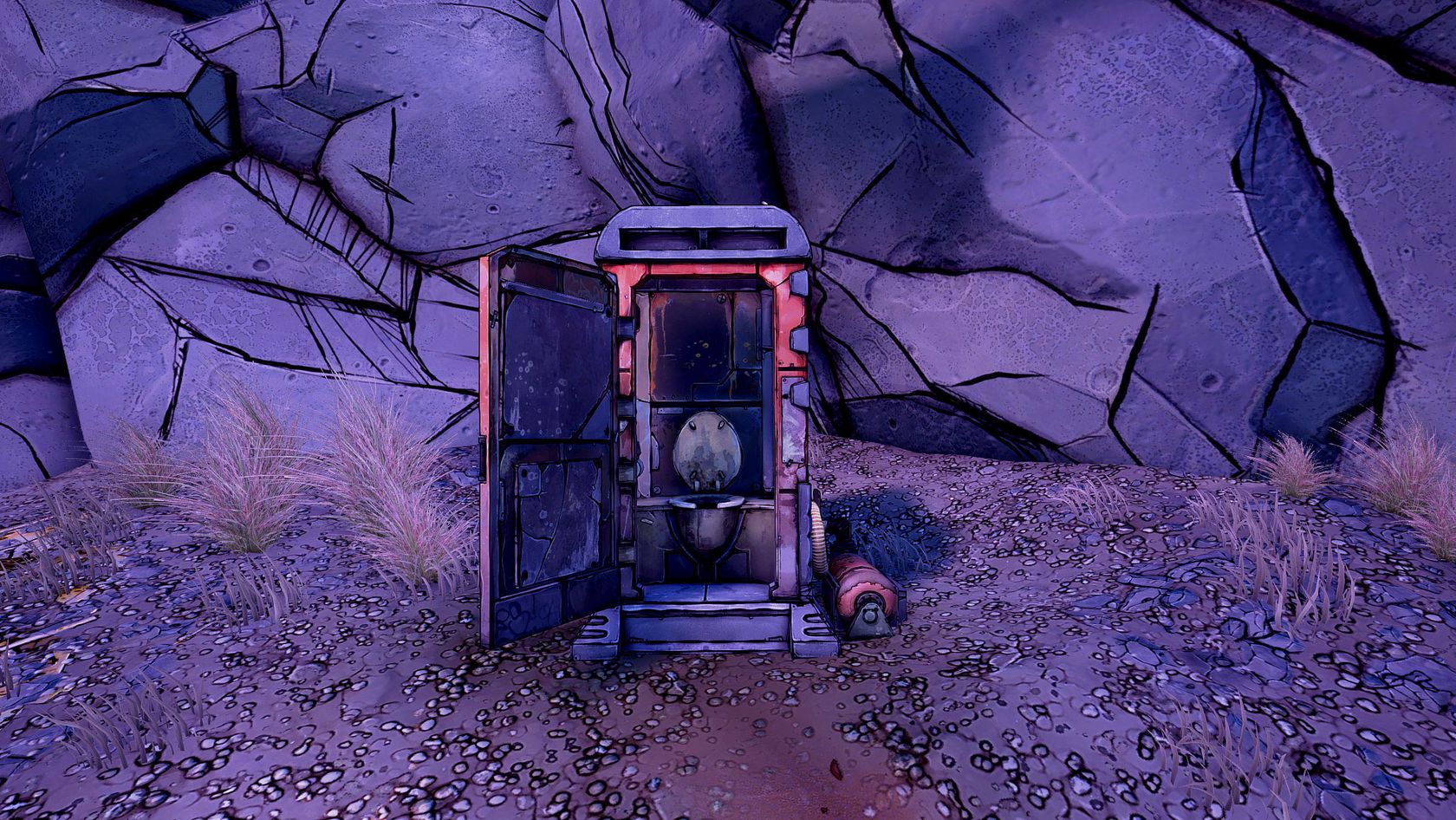 When bucket brigadier Solo Espresso told me he was playing Borderlands 3, the first question I asked was, of course, ‘Does it have shitters.’ This was his response. His commentary on these outhouses:

“It’s a place outside the starting zone. After the intro stuff, you get this. Kind of a mini-junkyard, but it isn’t. Second picture is same place as previous one, just a second one.

That silver beam of light looking like excalibur in the toilet is an ammo clip. The surrounding scrapheap makes for quite the dismal dump, but my say something nice is the colorful bunting is cheerful at best. Better than nothing, but still, it would bum me out to have to use this.

I guess to sidestep the inevitable inquiry of who maintains these shitters, the designers popped what looks like a vacuum cleaner onto the side of them so you get the impression they are some kind of automated composting toilet. That effort is admirable, but I still have questions. As far as I can tell, there’s no lore in the game that states what happens to the compost after it is processed. Does it just go into the ground? In what way does this impact the land? Is there a monster somewhere deep beneath the planet’s crust who is angered by the intrusion of the compost? I get the feeling the designers don’t want you to think too much about it. It’s just a crapper, so move on, gamer. Well, I think about these things! 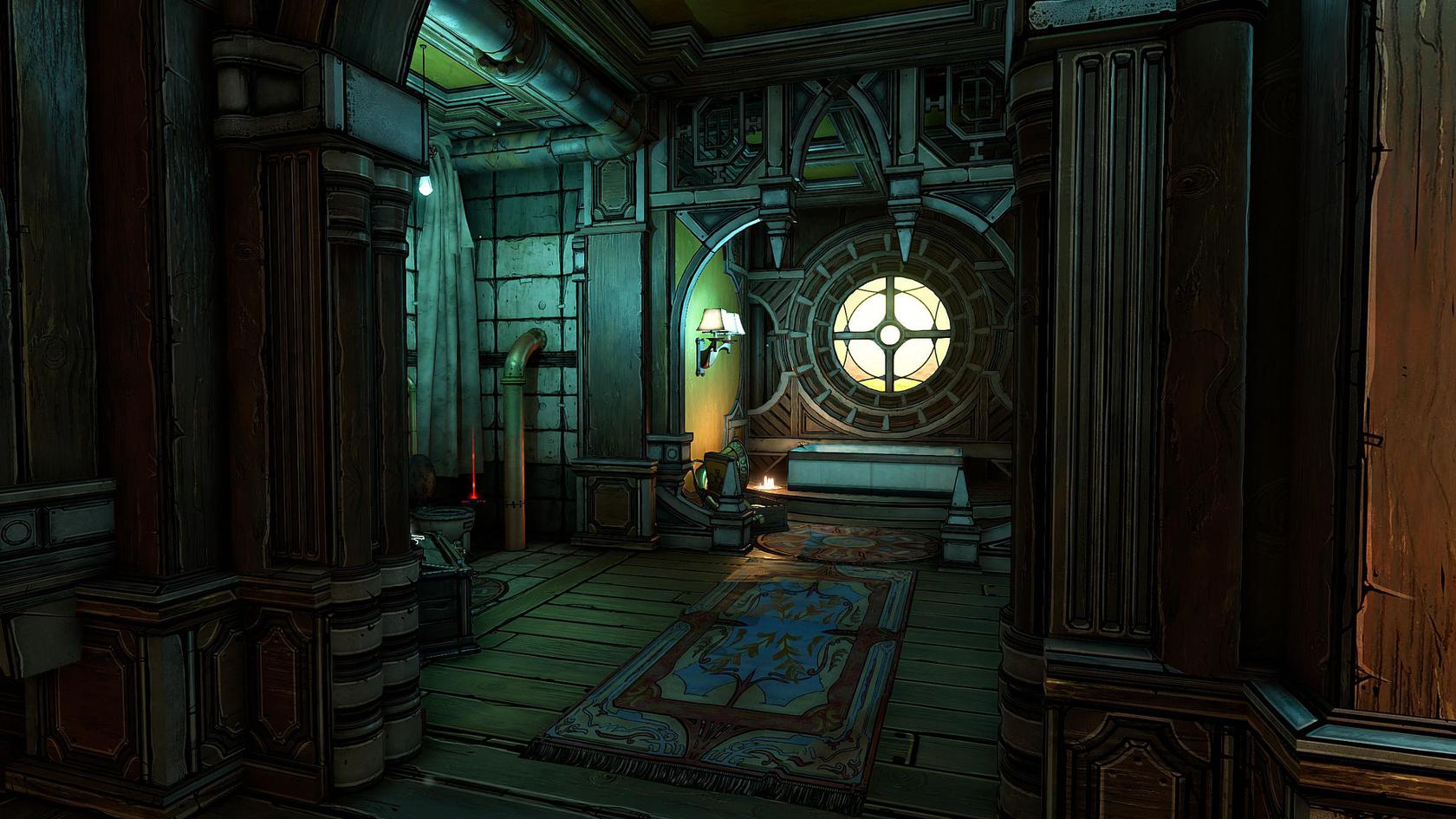 There’s some hidden secrets in the Jakobs Estate, including a golden bust of Lenin, and a secret door behind a bookcase! But you know what else is in this zone? A shitter.

I have questions. Is the Eden-6 neighborhood a Homeowner’s Association? This shitter looks remarkably similar to the one at Blackbarrel Cellars, though there are certain nuanced differences. Why did both these locations require bathside gramophones? Why do both of them have crappy curtain installations - What is that filthy painter’s dropcloth-looking thing hanging from above the toilet? And neither have doors. So, why doesn’t Jakobs Estate deserve a nod in the Blue Bowl potentials? Simply put, this location seems to have a better grasp of fire safety, and that bores me. 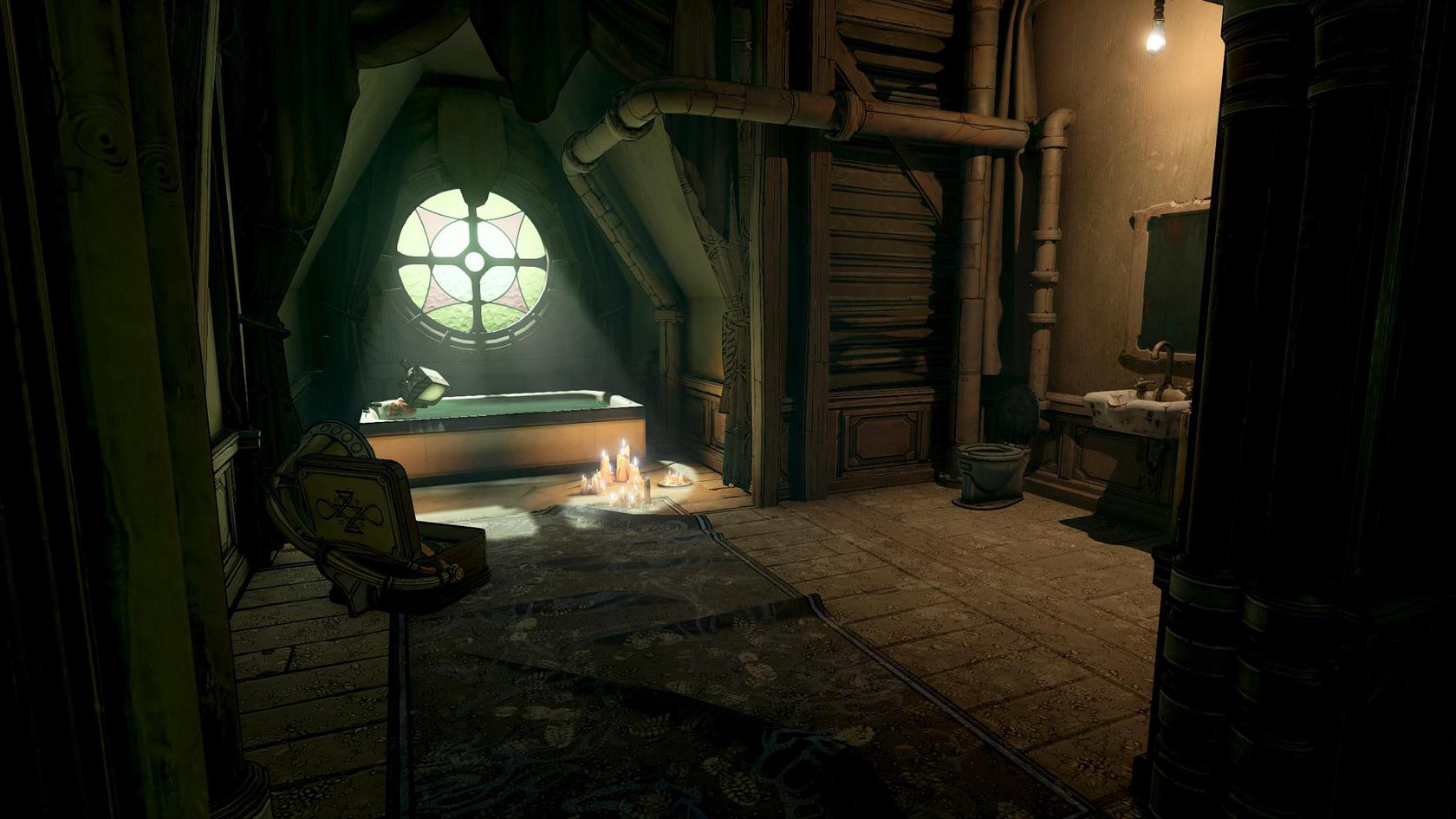 This shitter is fantastic. What am I looking at here? Someone in the tub with a TV head? Is the person dead? Is that someone relevant to the story in any way? Is that a gramophone, or something like it? Detective Espresso has the answers!

“Yeah, apparently. I have no clue, it’s no one important. Just a random idiot mob. And that is a gramophone, I think it’s what it’s called, in the game. It’s such a pretty bathroom, and I love everything in it.”

It is pretty great. But you know what, Borderlands 3, you are really showing your ass here. The curtains are clipping into the walls. The pipes are wrapping around some of the curtains - how doth one closeth thine drapery? And my favorite thing used to be rugs with unfixable wrinkles. My new favorite thing is wrinkled carpet with candles that have been left burning on top of them. This crapper is a tinderbox. Yikes. 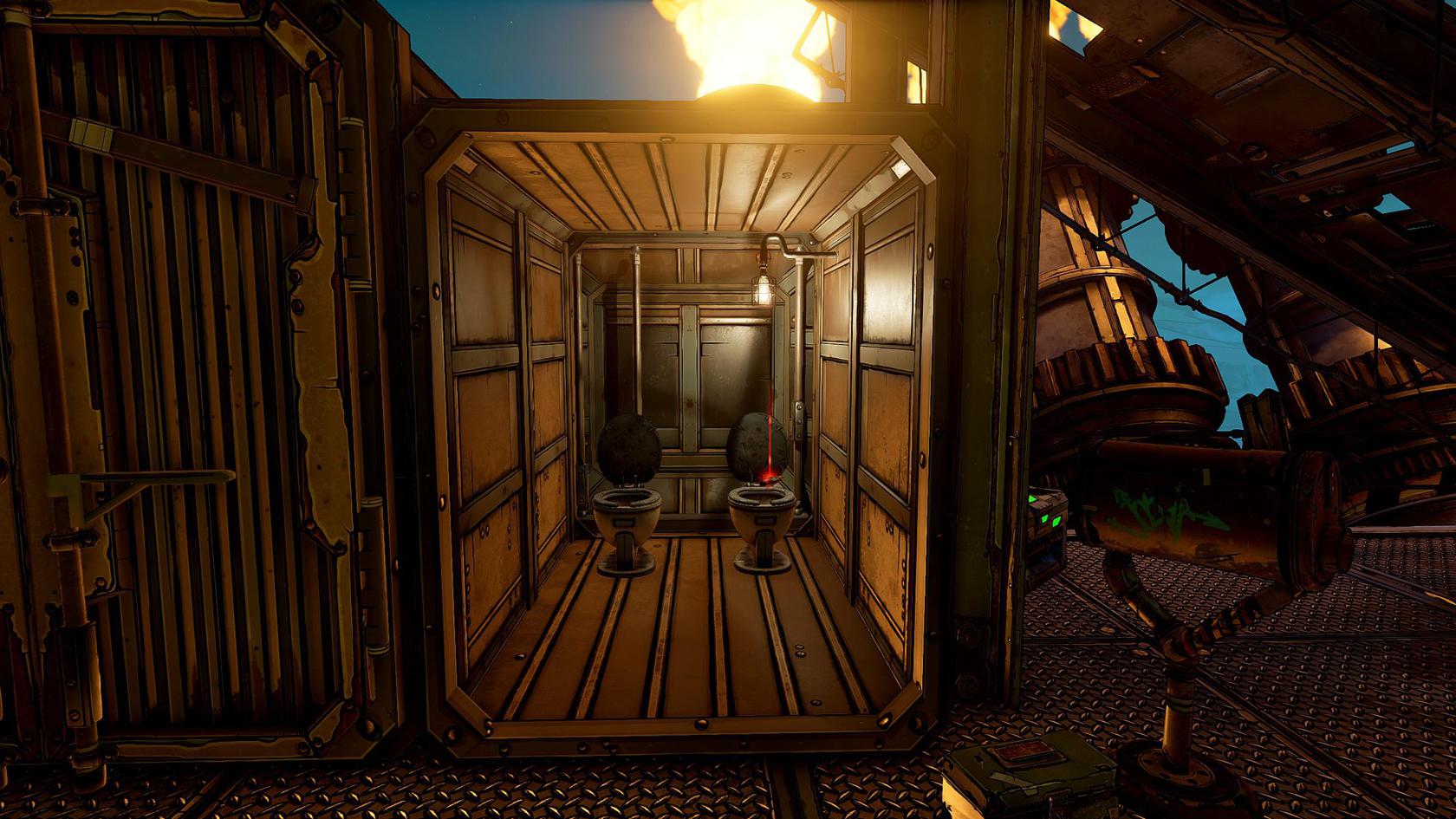 “Look it’s a double toilet! Just right there. Inside a shipping container two of them. #ToiletsWithThreateningAuras”

It’s not just remarkable that this unassuming shipping container sports two shitcans, which appear to have, somehow, a working flush function. It’s also wired for electricity!