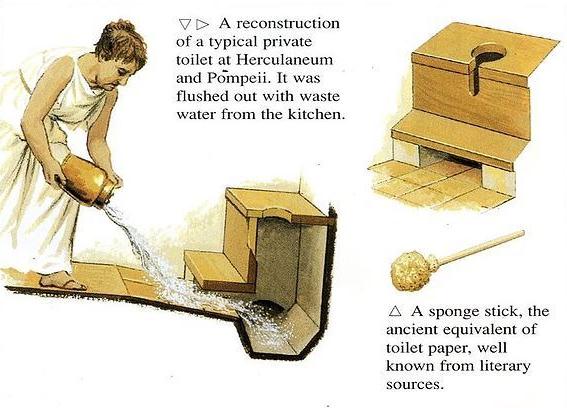 The Private Latrines of Ancient Rome!

Apparently August 26 is National Toilet Paper Day? And you know how I would like to celebrate this day - by talking about what life would be like without toilet paper. A lot of people on Earth don’t even use toilet paper, opting instead for things like straw, corn cobs, or just their hand, not to mention bidets which are enjoying quite the surge in popularity just lately. But check out this amazing diagram that illustrates how a toilet from ancient Rome might have looked: Instead of toilet paper, ancient people would have used a xylospongium, or tersorium. Essentially a sea sponge tied to a stick, this was was actually shared in public toilets. The tersorium was washed after each use with vinegar and salt water, which allegedly sanitized the object.

I don’t think I’d be down to try that, but what is intriguing about this article from the Manchester Museum is the diagram of the ancient toilet itself. Apparently the back-up of methane gases could cause actual explosions, however, this does seem an interesting concept to build from, for when society crumbles and we are feeling reluctant to start digging 6-foot deep pits for our composting toilets. Maybe I’m just bewitched by the elegance of that toga.