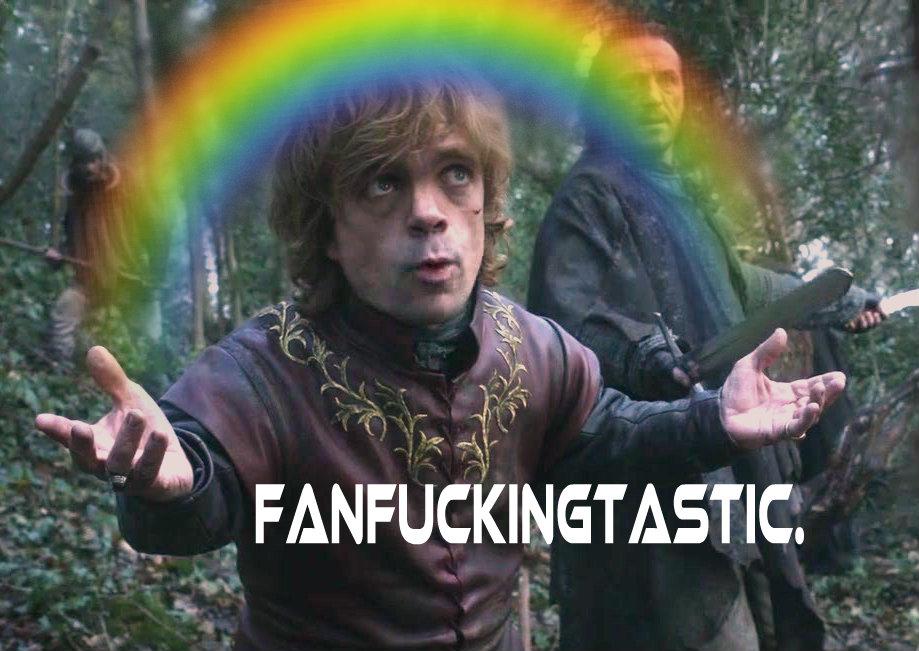 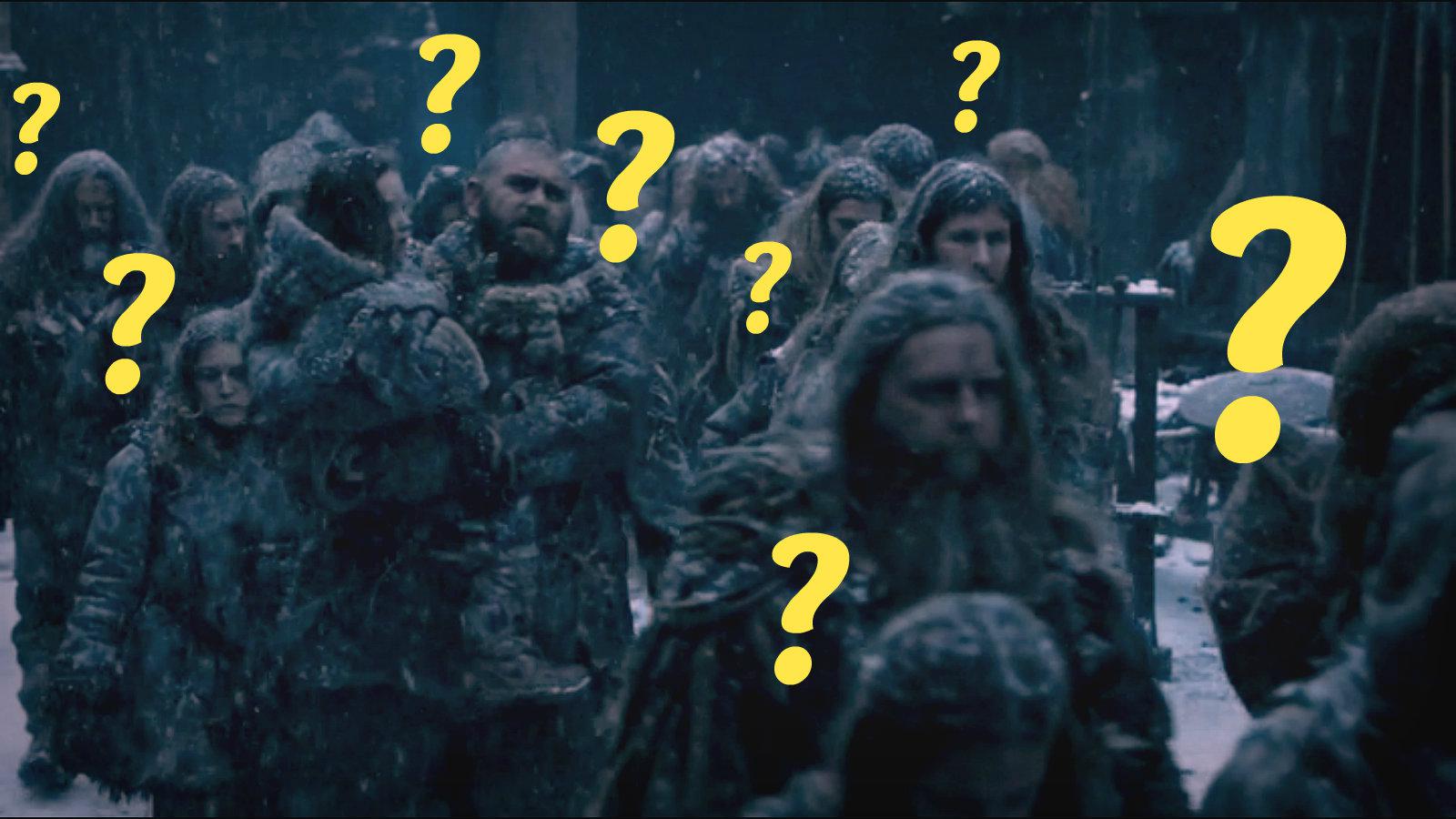 Giants aren’t the only strange sights north of the wall. 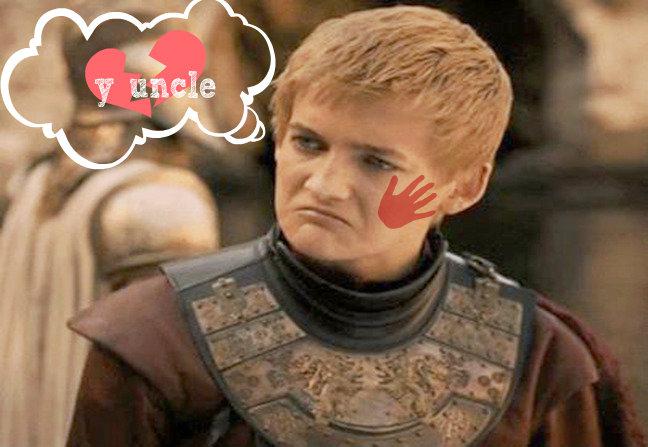 “And now I have slapped a king. Did my hand fall from my wrist?” 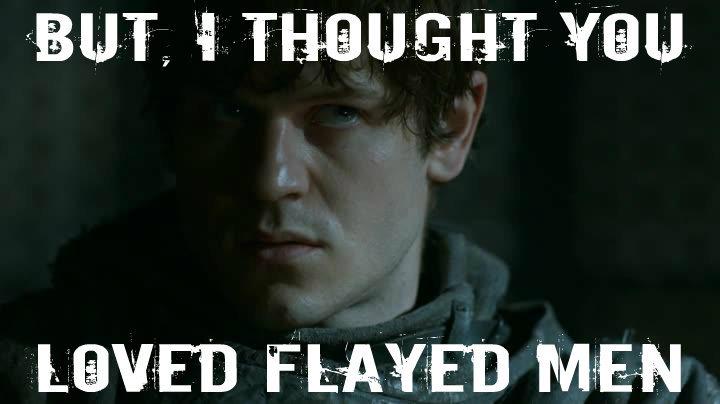 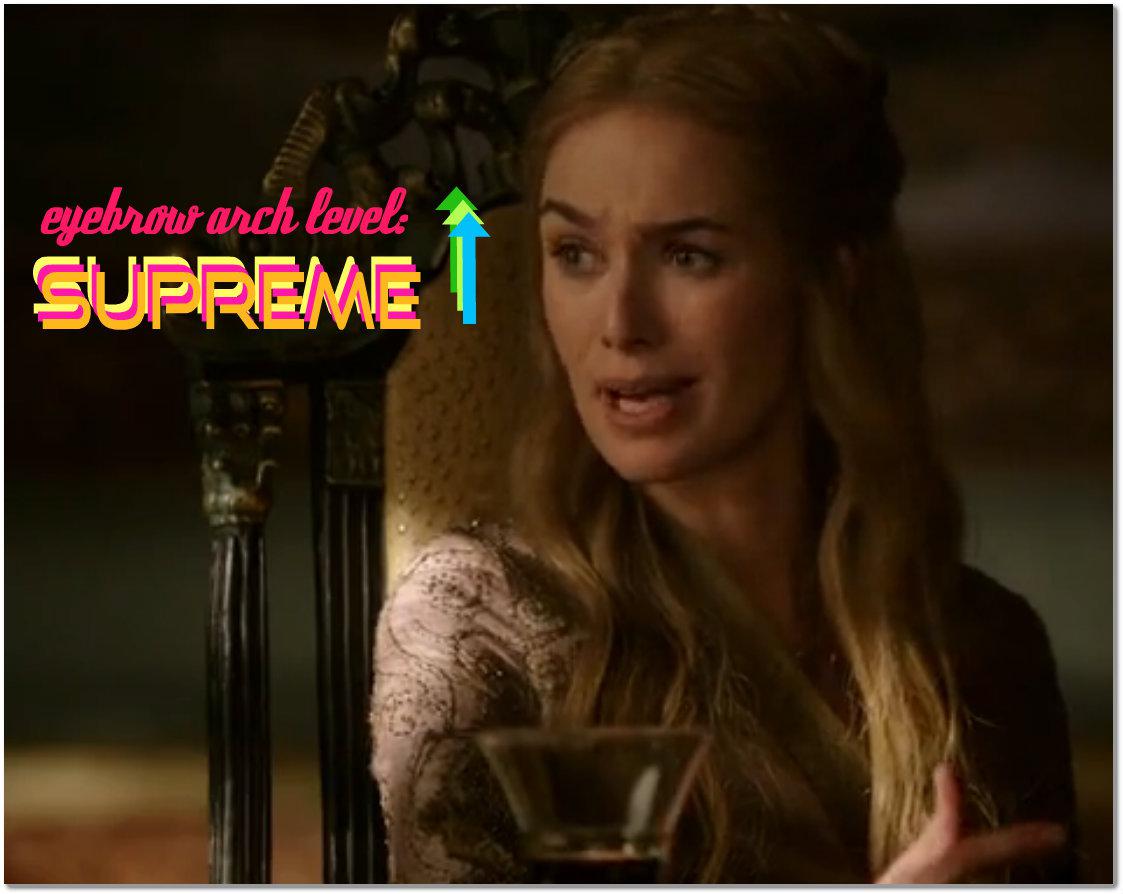 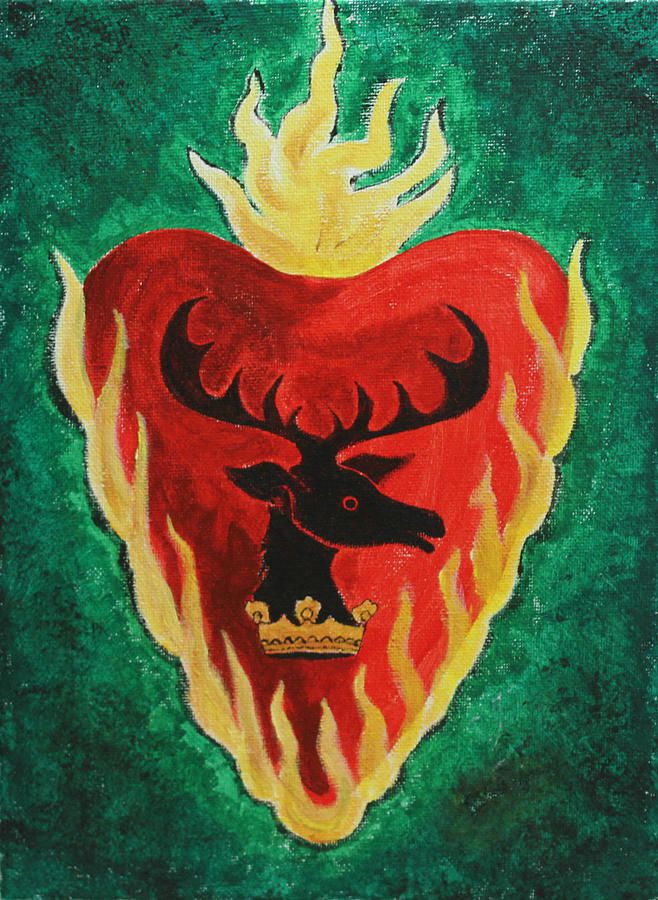 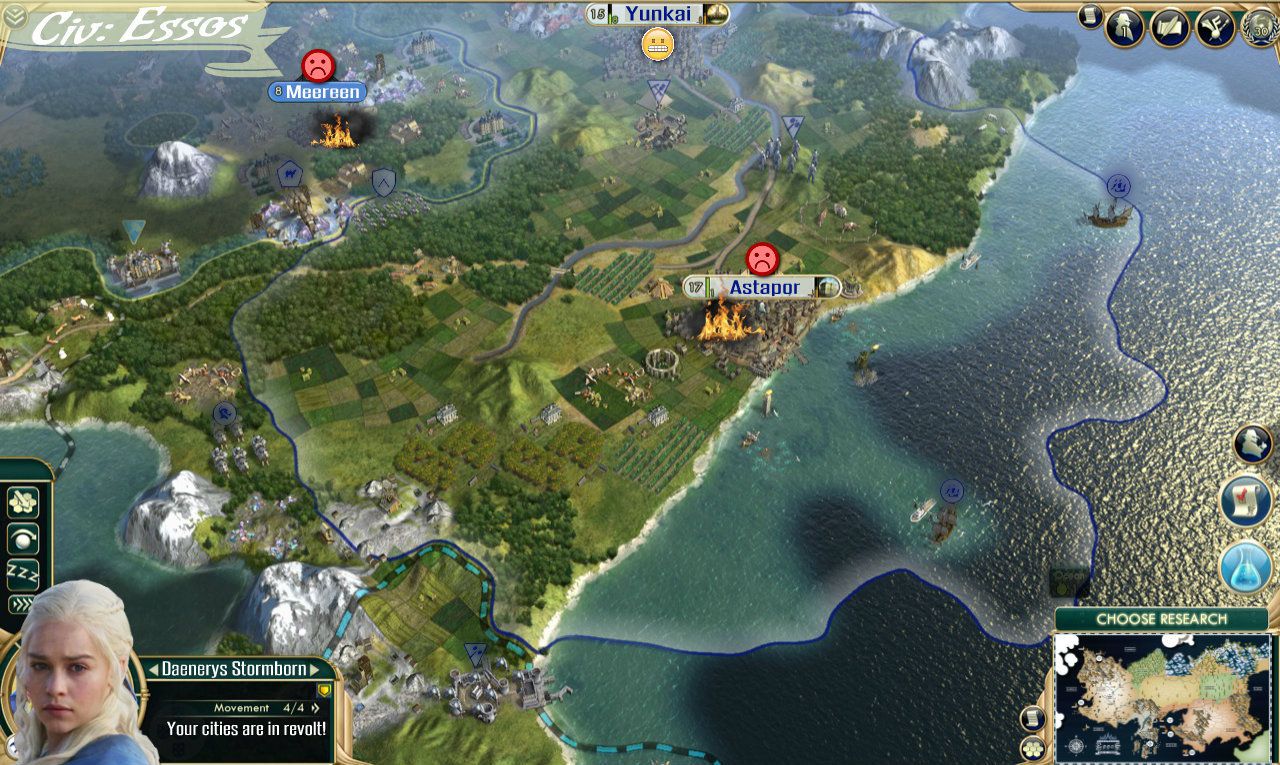 Your cities are in revolt! 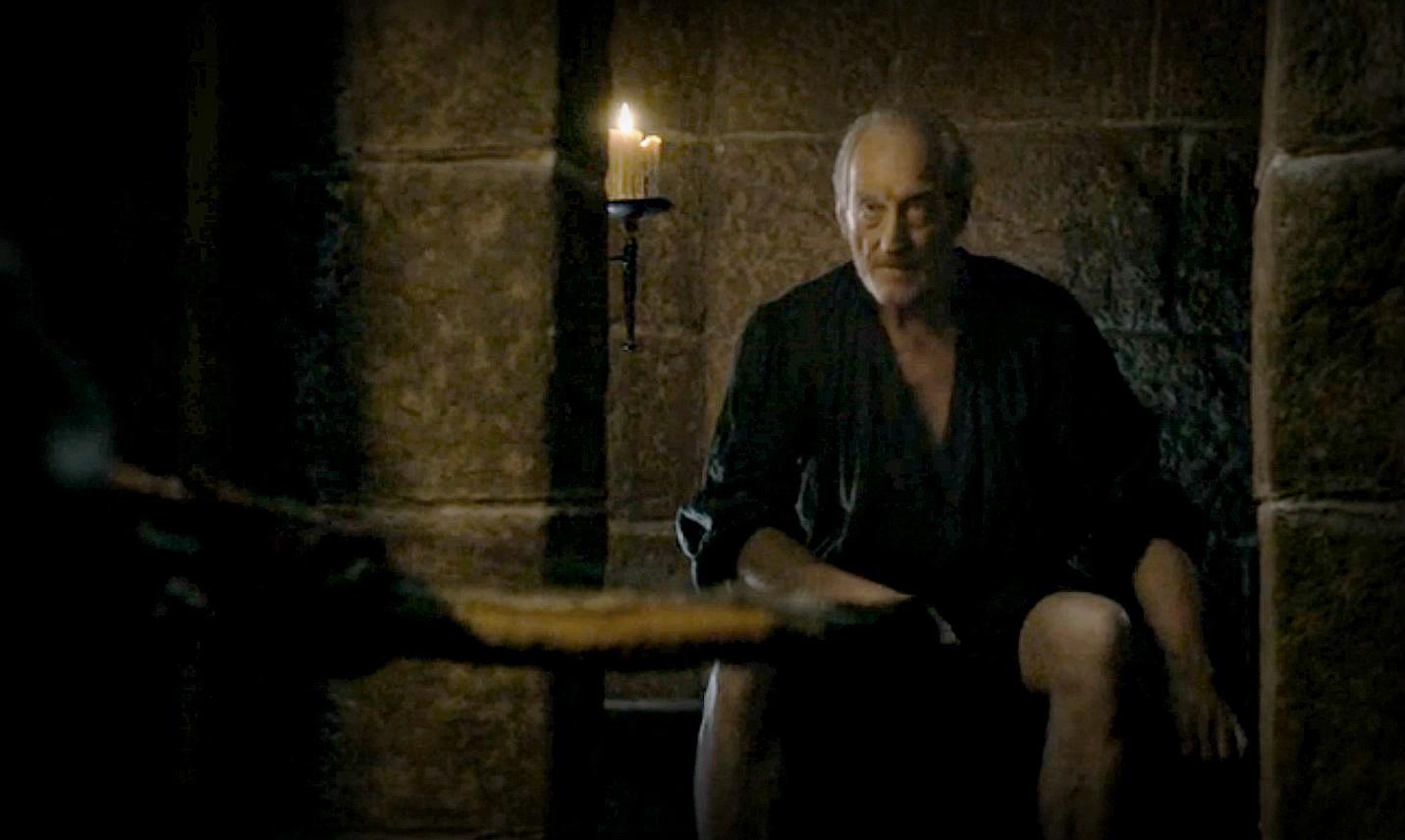 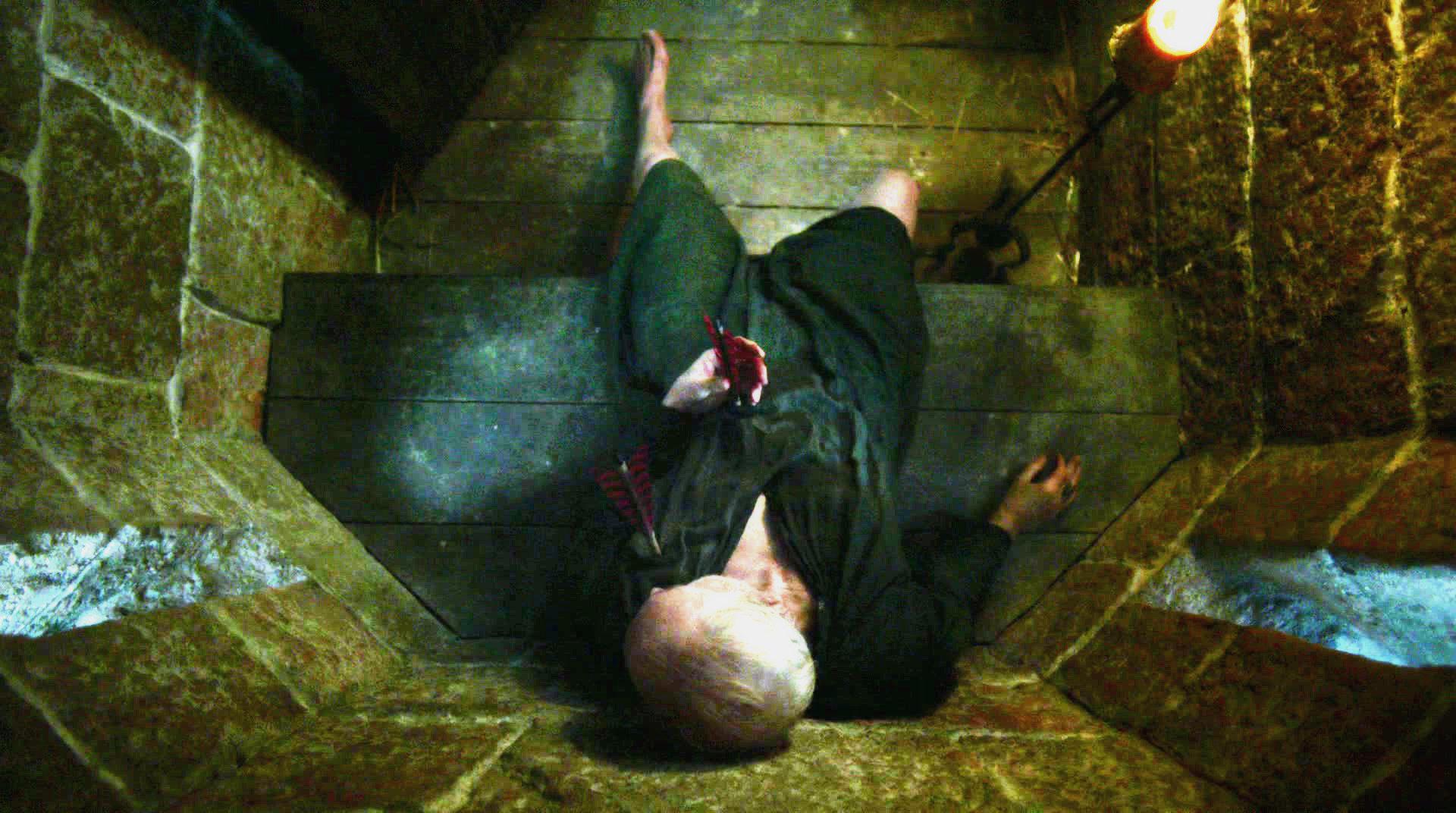 Tywin Lannister, son of Tytos and Jeyne Marbrand, is assassinated by his son Tyrion, for his crime of being a perennial and unremittent asshole. If that isn’t the biggest “Oops, guess I shouldn’t have dehumanized my son for the last 26 years” face I’ve ever seen.

This is only funny because of the jerk it happens to. While you might say to yourself, ‘But I don’t want to die on a toilet,’ it begs the question. At his funeral, where Tywin is arrayed in a fabulous black velvet Nightstalker Raiment, attendees remark that death on a toilet is an indignity that is uneclipsed. But could this perhaps been the most convenient way to croak? King Robert makes mention of, and perhaps foreshadows, the dreadful phenomenon which occurs immediately following death in Episode 3 of Season 1! 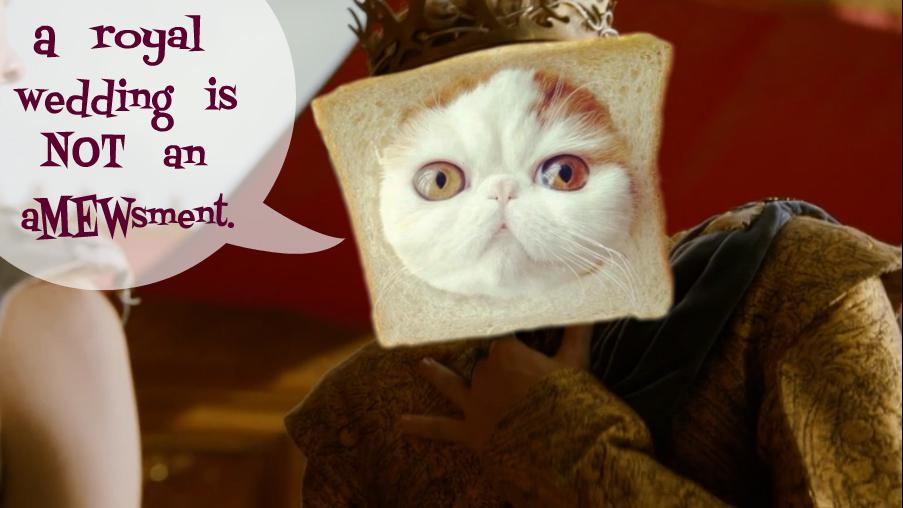 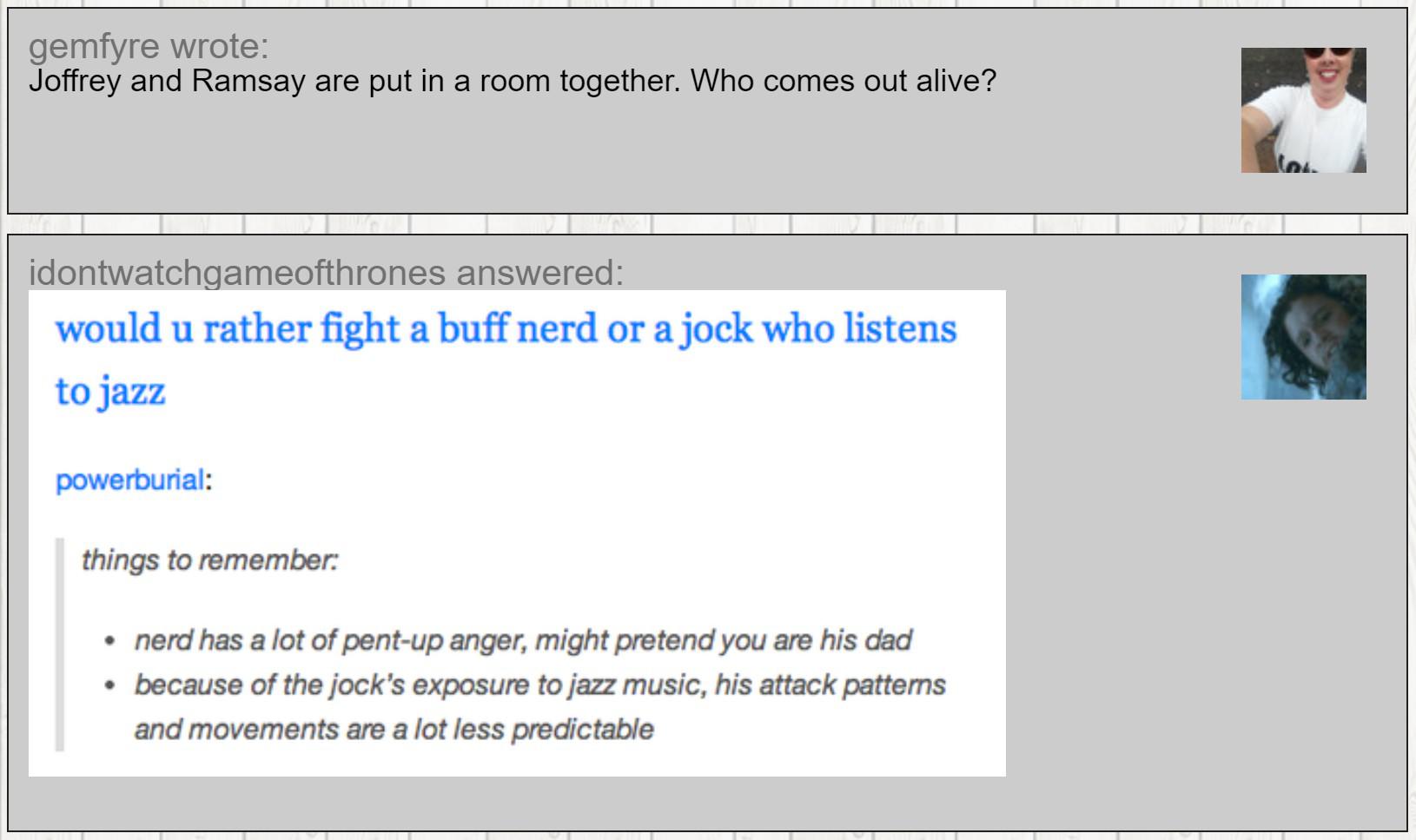 At times, this tumblr blog is dumbfoundedly accurate.

Image Source: I Don't Watch Game of Thrones, The Blog
game of thrones 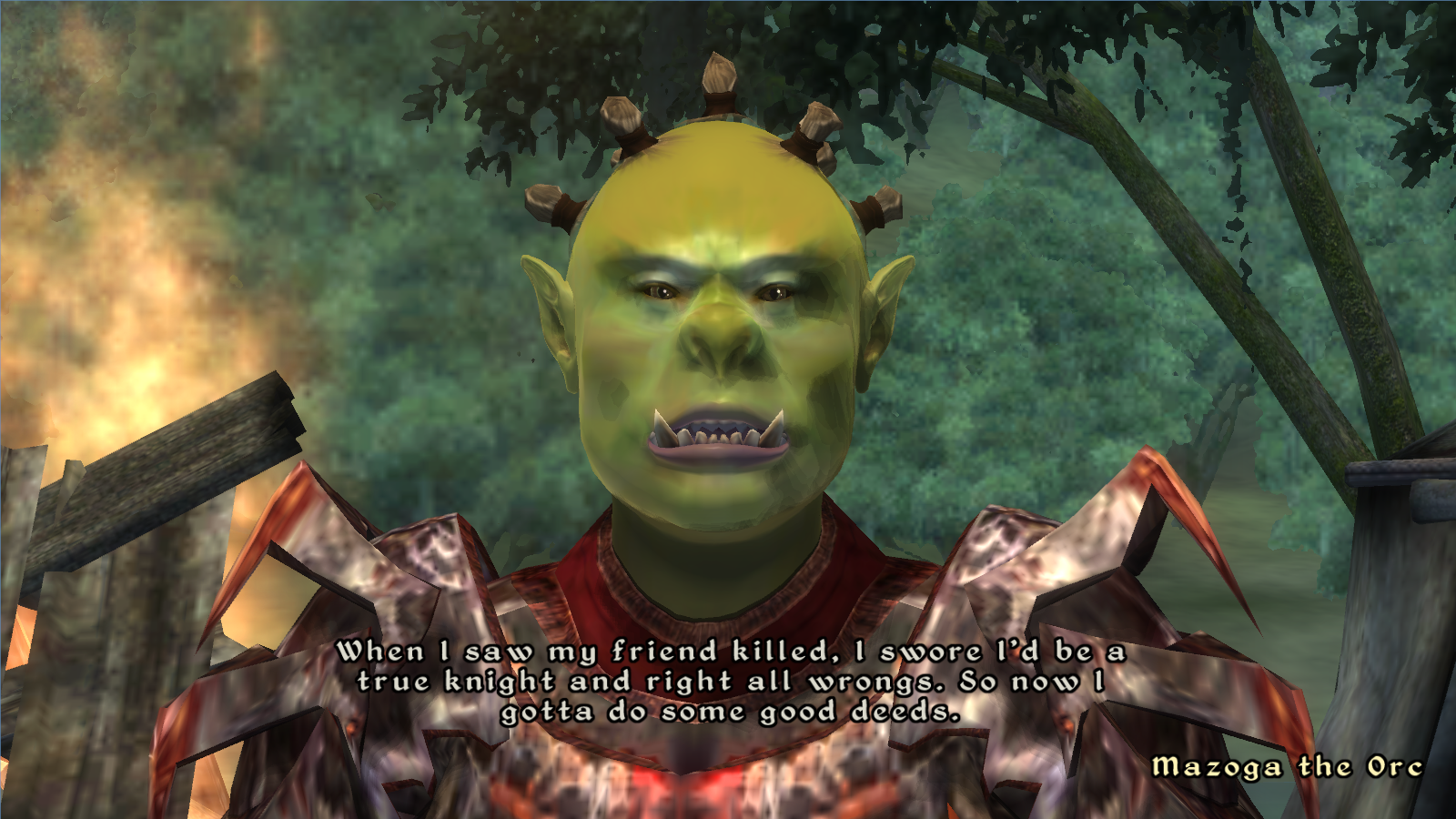 “When I saw my friend killed, I swore I’d be a true knight and right all wrongs. So now I gotta do some good deeds.” – Mazoga the Orc/Brienne of Tarth 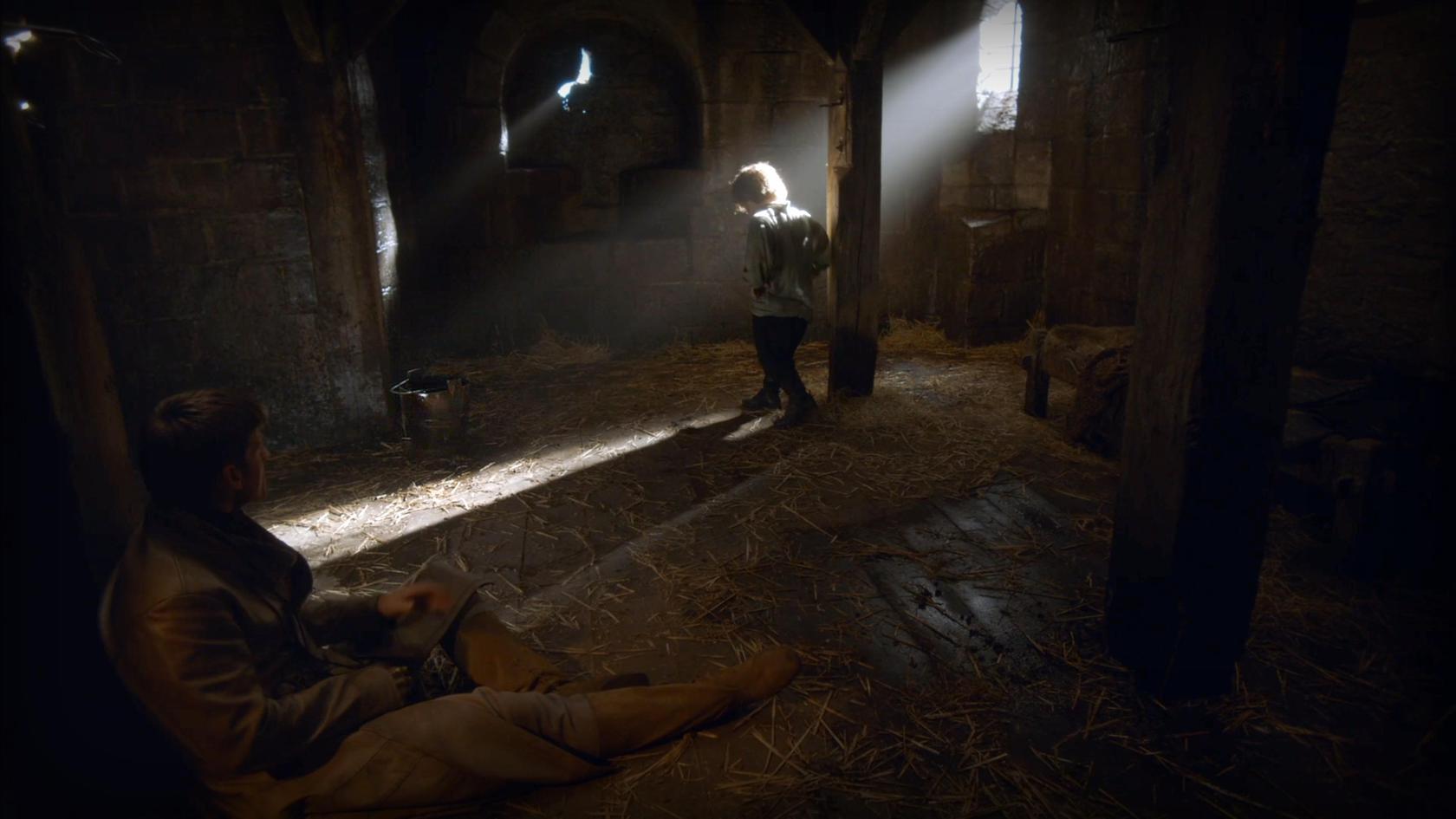 This classic prison shitter appears in Game of Thrones Season 4, Episode 4: Oathkeeper. Jaime Lannister makes mention of it personally at the very start of the scene with the line, “This isn’t so bad. You’ve got a pot to piss in.” What an honor!

Image Source: PixelJoint
this is art
game of thrones 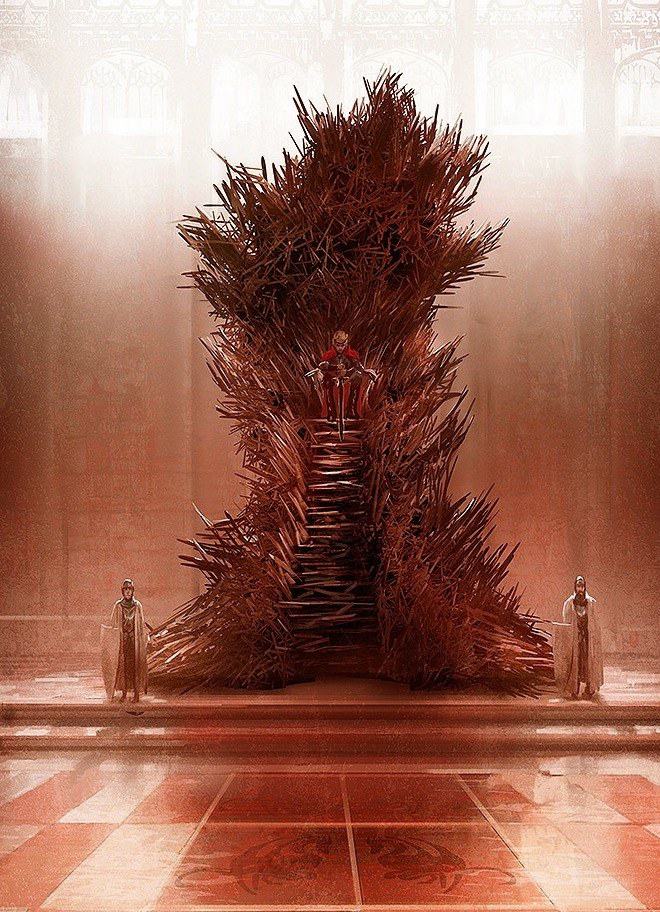 The Iron Throne, the way George R.R. Martin intended it.

While [Martin] acknowledges that the HBO version has become “iconic,” and is perhaps more realistic, “It’s still not right. It’s not the Iron Throne I see when I’m working on The Winds of Winter. It’s not the Iron Throne I want my readers to see. The way the throne is described in the books… HUGE, hulking, black and twisted, with the steep iron stairs in front, the high seat from which the king looks DOWN on everyone in the court… my throne is a hunched beast looming over the throne room, ugly and asymmetric.”

Image Source: Wired
this is art
game of thrones